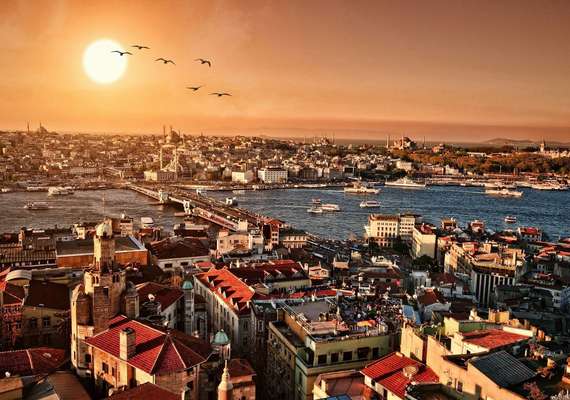 From Present Day to Past - Ebrar Sarı

from Present Day to Past

She flinched suddenly after the ringing of the. While the warmth of the sun was hitting his face, he immediately stand out of the bed after remembering the travel that he will do today.  Who is that? He is Selim studying for the 12th grade and his most loved lesson is History and today is the most important day for him. They are going to go on historical travel by classroom, so he prepared himself fast and left the home. The first place to go is Galata Tower, which has a landscape that makes people fascinated with the appearance and view. I was falling into a dream that I am flinched with someone’s touch.

- Heyy look at, someone is flying!

He was shocked in front of what he’d seen.

-How would he be, was he at this time?

He watched admiringly where he flew. He landed succesfully in Üsküdar doğancılar square. he was happy by being together within the history and his shock still continued. He comes to himself after hearing the voice of the guide. The next place to go is the Topkapı Palace after the adventure of Galata Tower. When they got to the Topkapı entrance, the guide started to explain.

- In Topkapi Palace, there is 4 yard: the 2nd yard is the imperial council, 3rd yard is the inner treasury, guys, there are hanging gardens that belong to the padishah in 4th. Selim has already bounced to another scholar after the guide explained the things.

- Incredibly, those palace and gardens were so big that it was not like what we thought before.

By saying that, he witnessed the talking of two people to the side. While he sneaked out by stepping aside the edge of them to hear what they were talking about, he was quite shocked because they were talking about the conspiracy against the padishah. Selim had to prevent that! Quickly he went to the 2nd yard, he explained to the guardians being in front of the door of the imperial council what he heard. Precautions were taken by guardians in case the reality of what he said might be. And the assassination, made on padishah, was prevented successfully. While I was about to taste the happiness of this, he felt a pain in his stomach which shows the meal break. The next place to go is Hagia Sophia. We head towards Hagia Sophia after we were filled up. As soon as they entered the place, they drew attention to 40 big windows. While Hagia Sophia was a wreck in the conquest of Istanbul, it was constructed as a fascinating mosque by Sultan Mehmet. The final destination to go is the Eyüpsultan. When we landed at the square, the guide started to explain.

-In time, there was a ceremony in this square which was displayed a gird, someone, with a sword, a big plane tree has come to the hand of our modern-day in this square. These places, traveled by the participated people, were allowed to walk around Eyupsultan so that they would think about traveling places. What made Selim draw attention was the big plane tree where he sat under and fell into the thoughts… He became very happy because of living the past in the present day. With the pride of our history, he left a tiring day behind.