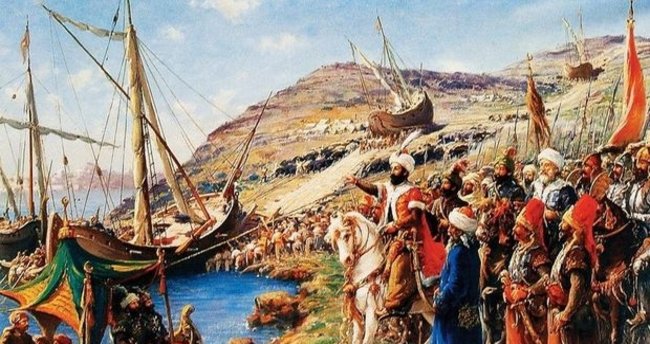 The year was 2009 and a girl was born. This girl was different than others because she has the ability to teleport the past. Firstly, no one believed her, including her mother that she has supernatural power.

The year became 2017. Her name was Ece. She was grown and reached out the 8 age and everyone wanted Ece to teleport the past.

Ece had many attempts over that request, but she couldn’t get efficiency. After that, Ece started to do what she always does – to focus.

She focused, but unfortunately, she couldn’t decide which time she will teleport, and suddenly she teleported to 1453 and saw a camera on her neck. Besides, there is a long dress which was cream color and spun silk on her.

She said to someone by standing up where she is.

-I wonder which time is that?

-Then, could I ask you something, darling?

- what is the little thing on your neck?

-It is a camera

-It is the device that people use to take a photo.

Besides, Ece was questioning why there is a camera on her neck before teleporting.

-No darling, I haven’t heard and seen this thing in my life.

She said by whispering,

-Whoops, I forgot that I am at the past time right now!

- Darling, did you say something?

When Ece called him an uncle, the whole peasant looked at the Ece. Indeed, they were carefully listening to their conversation of Fatih Sultan Mehmet and Ece, and then, Fatih Sultan Mehmet moved away there. There have been three hours since they talked. Ece was trying to find a house to stay in for now, but no one accepted Ece in their own house.

- Let's sleep a little bit so that time can pass swiftly.

. While she was sleeping at the moment, a sound raised.

- Darling, wake up, you are so cold

- Whoops, you are the uncle that asked which time we were.

-Oh girl, why did you become very happy suddenly?

-No, I got another thing in my mind.

- I want to ask you something.

- here you go sir, you can ask whatever you want.

-Who are you girl, you are different than the other children.

-there is a thing on your neck, and your speech is too different.

why did he come near the side of Ece in the middle of the night.?

-Okay darling. I have a request from you.

- you would make me happy if you take photos or photos of me with together in places where I will take you.

Ece now understood why she has a camera on her neck when she was teleporting.

-Why don't you come with me, you are so cold in here.

-No sir, I don't want you to disturb

-Okay sir, I don't want you to offense.

They set off the road. And morning has come. Ece was so happy where she is not.

They went outside immediately. The first destination was the “Hagia Sophia” which was a church at that time. Ece was very surprised and started to take a photo of Fatih Sultan Mehmet. The other destination was the Galata Tower which made Ece more amazed by this case because she didn't know about the estate of the Galata tower until 1453. Then, both Ece and Fatih Sultan Mehmet climbed to the top of the Galata Tower. Ece lied her eyes on the old Istanbul with a bird’s eye view and she took a photo of the old Istanbul a couple of times. Afterward, neither of them sat on the paving stone to rest after she took a photo of Fatih Sultan Mehmet.

-How will you take it, sir?

-I will take it whatever it costs because I want to perform the salaat even once. I need to convert Hagia Sophia church into Hagia Sophia mosque even once.

-You are very right sir

That was the day when the battle was finished. Ece exactly understood how Istanbul was taken with the hard work at the end of 53 days that the battle continued. Even once, Fatih Sultan Mehmet performed the salaat in the Hagia Sophia. He walked the ships from the land and Ece filmed them all. That was the last day of Ece in 1453. All people have known Ece at the least. And it was the time for Ece to go back. Her family wondered about her a lot. Fatih Sultan Mehmet was very sad because of the departure of Ece. The whole peasants and Fatih Sultan Mehmet believed that Ece moves to another house.

they hugged each other.

Then all the peasants;

Ece left there while she is smiling.

By passing the nook or cranny, she did what she always does- to focus. She teleported her own time by focussing.

Ece was sleeping in her red t-shirt and blue pajamas. The camera was at the edge of her head. She put the camera in a secret place after waking up the bed. Now, Ece has a secret too.

And that day Ece said to herself:

I wouldn’t think of such a process like that before. Having said that she continued her life by being 1-0 in front of the life.